Need Help with your ClearUP® Device?

Your satisfaction is important to us. In response to customer feedback, here are some useful tips for using ClearUP. 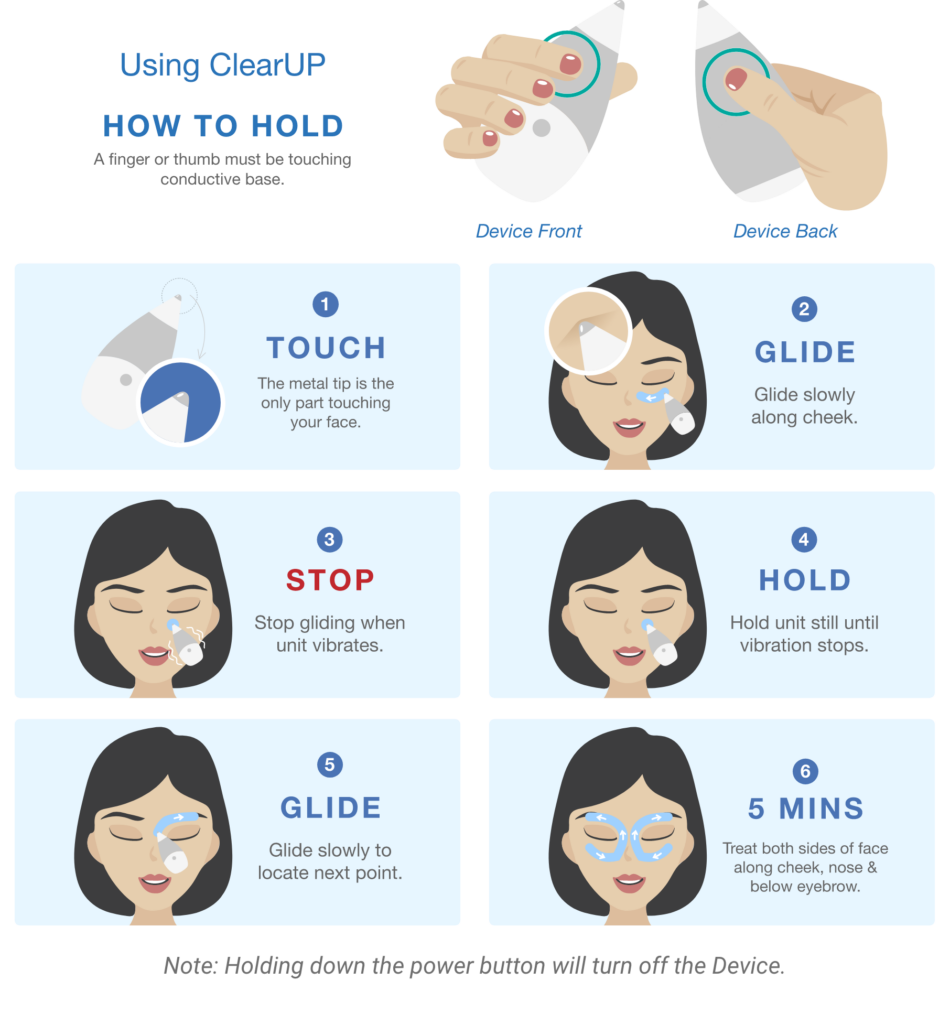 Helpful tips for your device

If the device does not turn on after charging is complete, a battery reboot may be needed:

How many people suffer from sinus pain and congestion associated with inflammation, allergies, sinus infections, cold and flu?

Approximately 200 million people in the U.S. are impacted by these symptoms.

What is bioelectronic medicine?

Bioelectronic medicine is the convergence of biology and electrical engineering. The human body is an electrochemical system. Bioelectronic devices work by modulating the electrical activity in peripheral and central nerves in order to mitigate both symptoms and underlying causes of disease.

What is microcurrent, and is it new?

Microcurrent is a low-current electrical stimulation about 1/1000 the level of traditional TENS therapy. Microcurrent has been used for decades by health care providers in implantable devices such as deep brain stimulators, pacemakers, and spinal cord stimulators. ClearUP® Sinus Pain Relief is the first treatment to use microcurrent to relieve sinus pain and congestion.

ClearUP is a small handheld device, and a non-invasive and drug-free treatment that uses gentle microcurrent to treat symptoms of sinus and nasal inflammation including sinus pain and congestion. ClearUP is FDA-cleared and clinically proven.

Who is ClearUP intended for?

How does ClearUP work?

ClearUP uses gentle microcurrent to stimulate the nerves underlying the sinus passages in the cheek, nose and brow bone. The device detects the optimal treatment points and emits microcurrent waveforms demonstrated to relieve sinus pain and congestion. ClearUP is designed to be reusable and it is also rechargeable.

How do I use ClearUP?

ClearUP works by gliding the device along the skin overlying sinus passages. To use ClearUP, first turn the device on and select the intensity level you desire. Next, guide the ClearUP tip along your cheek, nose and under the brow bone. Stop when the device vibrates, indicating it has identified a treatment point. The device then transmits microcurrent to this point. After seven seconds ClearUP will stop vibrating, prompting you to resume gliding it along the designated areas. Continue this process around the cheek, nose and brow bone on both sides of the face for five minutes. Use as needed.

How long does the treatment last?

In clinical studies, subjects using ClearUP reported significant improvements (compared to sham) in sinus pain and congestion 10 minutes after use. These studies also revealed that a single 5-minute treatment lasts up to 6 hours. Users reported week-over-week reduction in symptom severity with regular use.

Yes, results from a clinical trial conducted at a top-tier academic research center showed that overall, 3 out of 4 users achieved sinus pain relief just 10 minutes after treatment and 82% preferred ClearUP to their current treatment. In a second clinical trial, ClearUP was shown to reduce congestion in 88% of users.

Is ClearUP cleared by the FDA?

ClearUP is a Class II medical device with FDA clearance for over-the-counter purchase.

ClearUP is FDA-cleared and has passed all required safety testing. Users should follow all instructions to ensure safety.

Does ClearUP have a battery and will I need to replace it?

ClearUP is powered by a lithium battery, which is rechargeable using the accompanying USB-C charger (Do not replace the battery).

Is my ClearUP rechargeable?

Your ClearUP is rechargeable. The unit should be charged prior to first use and as necessary thereafter. ClearUP® will be disabled while it is charging.

How will I know if my ClearUP needs to be charged?

If your ClearUP needs to be charged, a light located on the front bottom of the device will blink slowly.

How do I keep my ClearUP unit clean?

Where can I purchase ClearUP?

ClearUP is available for purchase online via the site, Amazon, Walmart.com, BestBuy.com, Walgreens.com, FSA/HSA stores. Sign up for our mailing list to hear about discounts and news firsthand.

Is ClearUP covered by my insurance, HSA or FSA?

ClearUP is FSA and HSA eligible. It is not covered by insurance at this time.

Does Tivic Health have new products in the pipeline?

We are exploring the impact of bioelectronic therapy for other indications. See our Product Pipeline.

Stay in the know with all things Tivic.

Have questions or need help?